The South African film industry has come a long way since the days when we thought Ou Leon was the funniest thing ever (Remember that, hai shame). Today, I want to look at the state of South African cinema.

Our country has a rich narrative culture. We live in an extremely diverse country and with that comes unique views of the South African experience. Many young writers and directors are embracing these stories and are finding powerful and unique ways to tell them. Check out Five Fingers for Marseilles, or Inxaba if you don’t believe me.

This is not tied to my first point, this is all about being creative on a low budget. The local industry doesn’t have the financial muscle of Hollywood, instead we have filmmakers working around these issues to produce great films. In the right hands, this means the film is handled to maximize the narrative, creating a fresh cinematic experience.

A lack of Identity:

One of the biggest issues in our film industry is a lack of identity. There exists a dichotomy between the rich character-driven narrative and the stylish Hollywoodesque blockbuster. Four Corners is the perfect example of this, a strong local character narrative, which quickly forgoes its character growth for flashy shootouts. The stylistic nature of the action sequences work against the narrative, glorying the violence that our protagonist is trying to escape. Four Corners is still a good film nonetheless. 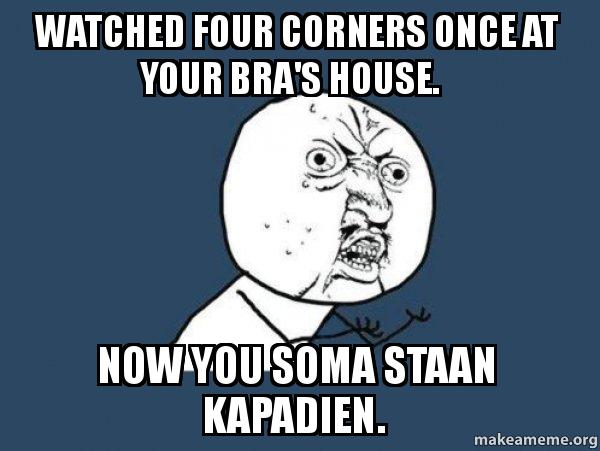 Too often, we see films, not just local, sacrifice the narrative for grandiose CGI effects and overbloated action sequences just for the hell of it. The truth is that we love the spectacle. The average movie-goer would preferable go and watch a 2-hour-long action sequence over a character-driven drama. Producers know this and back the formula. I mean who doesn’t want to make bank. For South African filmmakers, this is tough because we lack that financial clout. It’s hard producing a $150 million blockbuster on a R10 million budget.

The “It’s good for a South African film”:

This statement is the bane of my existence. Yes, I’m guilty of this too, but it’s something that we need to change. The statement reflects the fact that we don’t hold local cinema up to a very high standard. In a recent Instagram poll I conducted, 35% of all respondents said they wouldn’t pay to see a local film!

I’m hoping to write a piece more regularly. Let me know what you would like me to write about next!