An ex-convict (Mel Gibson) and his estranged daughter (Erin Moriarty) go on the run from her drug-dealing boyfriend (Diego Luna) and his vicious cartel.

“Tashneem” – Just like JT brought sexy back, Mel Gibson is bringing redemption back in his ‘come-back’ movie Blood Father. John Link (Mel Gibson) an ex-con and recovering alcoholic, living in a trailer park and trying to tame his inner demons with the help of his AA sponsor, Kirby (William H Macy). Link gets a call from his estranged teen daughter Lydia (Erin Moriaty), who happens to be in a pickle after she accidently shoots her drug cartel boyfriend. With the drug cartel hunting Lydia down, it’s up to Link to protect his naïve and somewhat blasé daughter. 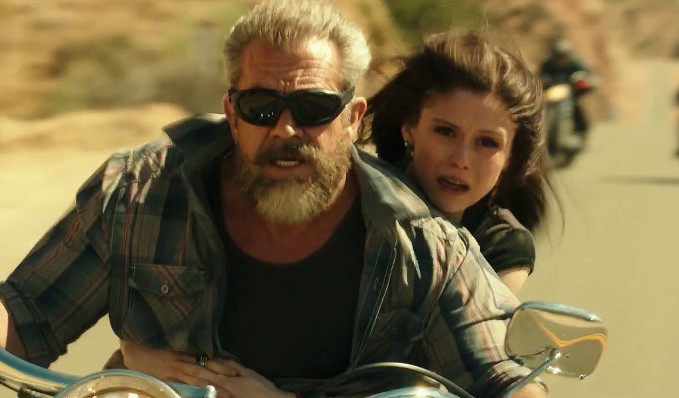 The way Link uses his past to protect his daughter is both helpful and dangerous, as he is forced to face the past he has been running from by calling in favours from his old mentor and prison friends. This just adds to the films humour, necessary violence and gritty action packed scenes. I was surprised that my two friends and I were the only ones laughing at Links agitated antics and the funny banter between father and daughter.

Gibson brings regret, devotion and fearlessness while Moriaty brings heart and loyalty, which is the perfect balance for the cool chemistry the two have. Moriaty will undoubtedly take Hollywood by storm, so keep your eye out for her, this woman has amazing talent! One problem we had with the film was director Jean-François Richet’s jittery camera style, it’s too obvious, unneeded in some scenes and just too darn distracting.

I really enjoyed this movie and it is BLOODY great to see Gibson doing what he does best, especially after being in the dog box with Hollywood and many fans. This movie will reassure you that our good kinda ‘crazy’ Gibson is back. The film even has those typical Gibson ‘I don’t give a F**K’ moments, where he angrily screams and hilariously complains, all while being shot at by gangsters! Clichés only Mel Gibson can pull off. Cliché’s that have been terribly missed! With an engaging storyline so fitting for Gibson and his past discretions, it’s hard not to love the movie. GET OFF YOUR ASS AND GO WATCH IT! 7.5/10

This movie was so entertaining that I now look forward to director Gibson’s ‘Hacksaw Ridge’, out in December.